Myth: Animal agriculture is a crucial component of nutrient cycles.

Closed-loop agriculture is based on the idea that the nutrients removed from the soil through the cultivation and consumption of plants are returned to the soil. Consequently, all primary, secondary and final consumers must return their metabolic products and finally their (residual) bodies to the soil [34]. 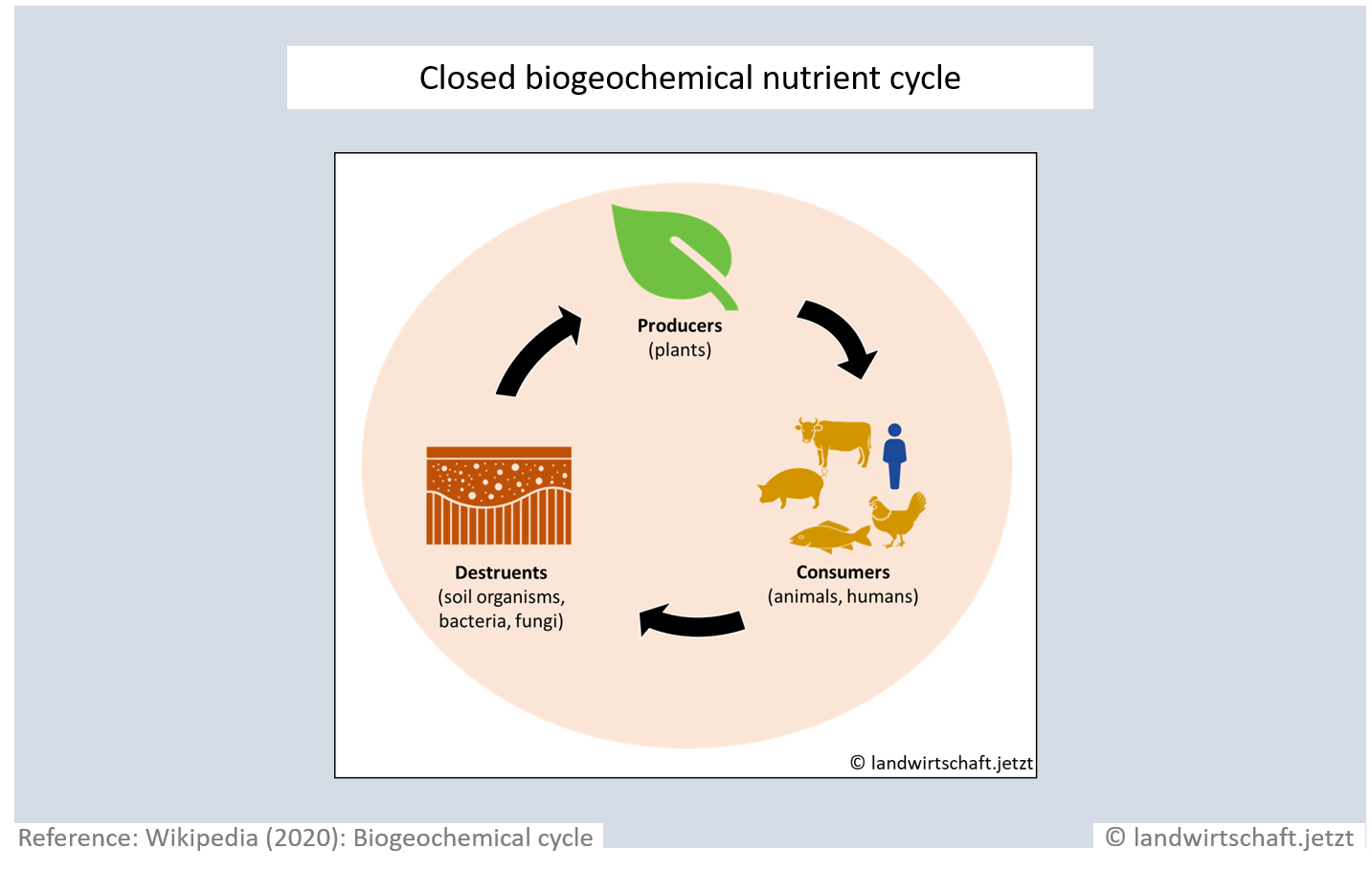 A closed biological cycle is not present in German, as in virtually all modern agriculture. The nutrient cycle of an agriculture with animal husbandry is broken in several ways.

(i) According to the circular economy, nutrients have to be returned to the extracted soils via excrements, but also bodies of animals and humans. However, mainly manure and certain animal slaughter wastes are applied to the field, but hardly any animal products that are consumed and digested by humans and domestic animals (meat, milk, eggs). The excrements of humans are collected through sewage treatment plants, where important nutrients are removed from the cycle by conversion to gases or delivery to industry ([12], p.57). Due to problematic components (industrial, household, drug residues and pathogens) only a very small proportion of sewage sludge may be used in agriculture ([12], p.42). Animal products, which are not consumed by humans, but otherwise used (animal skins, blood, bones, fats) are completely withdrawn from the cycle. It is practically and ethically difficult to return the bodies of domestic animals and humans to agricultural land.

(ii) The animals are fed nutrients of foreign soils via imported plants. Germany-wide, the foreign share of feed of digestible protein is 33% ([9], p.10). A return of the nutrients does not take place, so that the exporting countries (primarily the USA, Brazil, Argentina) are irretrievably deprived of nutrients via this broken cycle. On the other hand, the oversupply of nitrogen and phosphorus leads to numerous health and environmental problems. The oversupply of nitrogen [10] regularly leads to exceeding the EU limits for nitrate pollution of groundwater, which is harmful to human health ([13], p.71). Nitrogen and phosphorus eventually also reach lakes and seas via rivers, where they trigger eutrophication. In addition, the biodiversity of various ecosystems is disturbed and air quality decreases due to particulate matter generated by ammonia ([13], p.105 ff).

(iii) The enormous demand for animal feed requires intensification of agriculture using artificial fertilizers and pesticides. In Germany, more than half (56%) of the nitrogen fertilizer is artificial fertilizer ([13], p.63). Sales of pesticides for agriculture in Germany in 2016 were over 32 thousand tons of active ingredient ([13], p.54). In the period 2009-2012, the limits for herbicides, fungicides and insecticides in groundwater were exceeded in about 5% of the random samples ([13], p.111).

Animal agriculture is therefore not a necessary component of a nutrient cycle, but rather a resource-intensive factor that brings the material flow balance into disequilibrium. 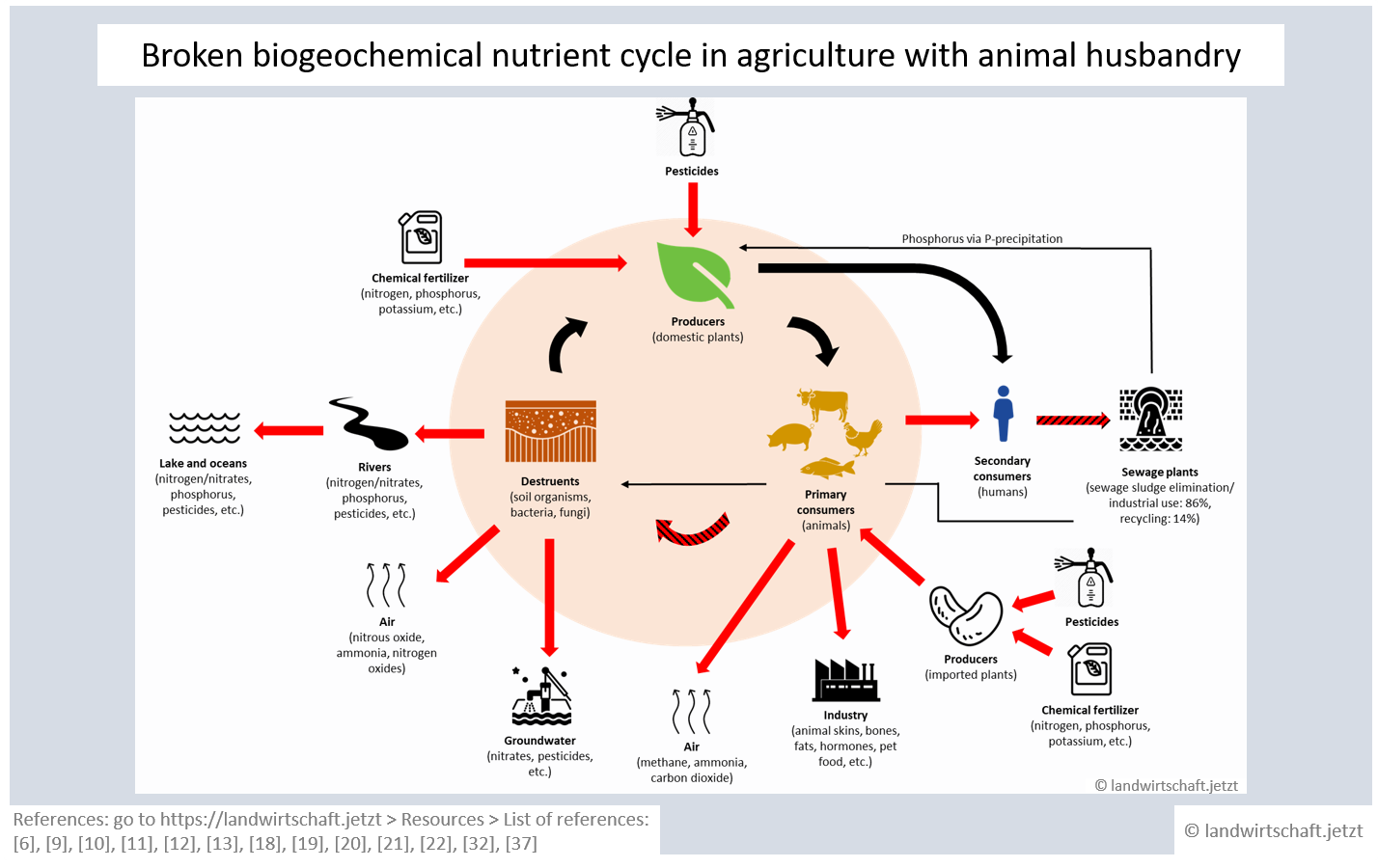 Without the recycling of human excrements and bodies, agriculture without animal use (vegan organic agriculture) is not a completely closed nutrient cycle either, but it can be practiced sustainably without the addition of synthetic fertilizers and pesticides. Legumes can fix the most important macronutrient nitrogen in sufficient quantities from the air via a symbiosis with nodule bacteria. Through regular green manure with legumes and the additional application of self-produced, biocyclic humus and mature compost, bound nitrogen and all other macro- and micronutrients can be added to the soil. The production of humus and compost can be achieved on the one hand via cyclic fruit rotations ([14], chapter 3.1.1.1) and on the other hand via a part of the areas previously required for animal feed ([14], Kp. 3.6). Any nutrient deficits that may arise can be compensated with naturally available additives (e.g. rock phosphate, potassium sulfate, magnesium sulfate) [15],[16]. 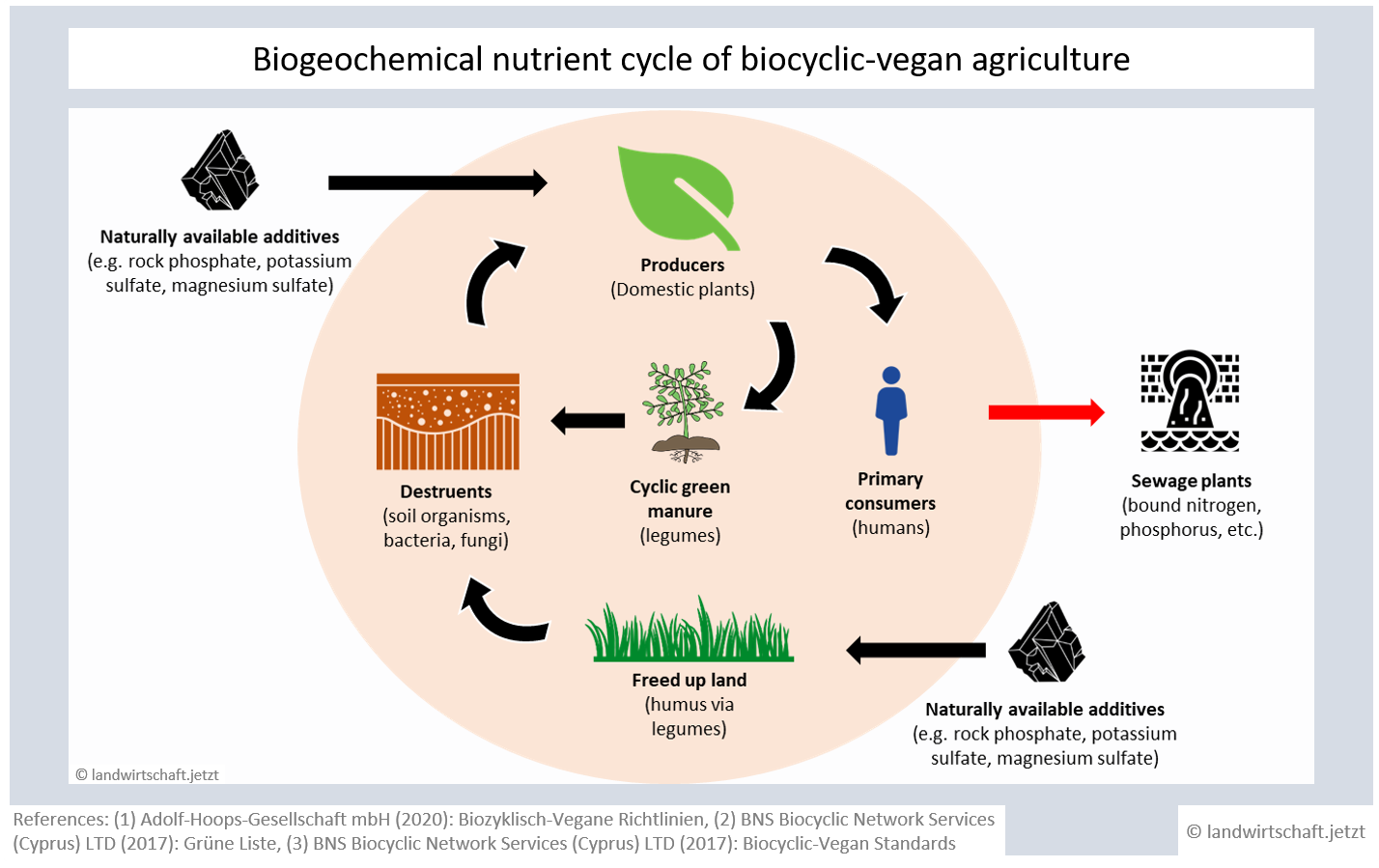